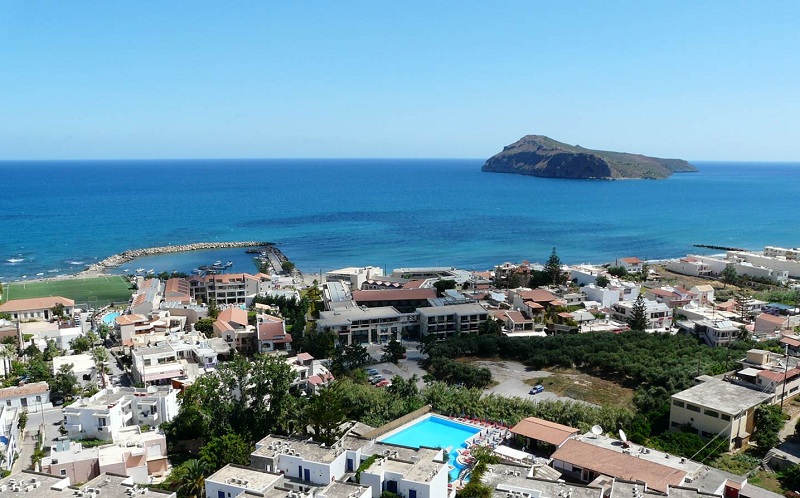 View from the traditional upper village of Platanias towards the small harbour and Theodore island.

In recent years, the village and seaside settlement of Platanias has developed into one of the major tourist resorts of Crete’s north west coast. The large number of quality accommodation facilities and all kind of tourism related services makes it unique and self-functioning.

The village is located ca. 11 km west of Chania. It attracts annually during the summer season from May to October thousands of visitors, Greeks and foreigners.

Platanias is known for its fine sandy beaches and clean seas, and also for its possibilities for great entertainment. Right at the seaside one can find comfortable beach clubs offering all necessary facilities for a relaxing day at the sea. Everywhere in the busy village streets excellent restaurants and taverns offer a wide variety of local cuisine emphasizing Cretan products, grown in the area.

There are also many events held during the summer months: concerts with local musicians and singers, theatrical performances. The major cultural event is the mid-summer “Agriculture and Tourism Festival”. For seven days Greek and foreign visitors are given the opportunity to sample the local products. Experience their exceptional taste and aroma, while coming in touch with Cretan culture and tradition.

Walk to the small natural harbour which provides safe haven for some fishing and excursion boats. Start from here your fascinating boat trip to and around the island Theodore.

Walk up to the old village of Platanias (called Pano Platanias) which is spread over the hill top (10 min. walk from the seaside center) and enjoy panoramic views to the sea, to endless valleys with olive- and orange groves, the island Theodore and the gulf of Chania. This traditional part of Platanias  with its traditional cobblestone alleys has centuries-old history as evidenced by the Hellenistic and Roman finds.

Worth a visit in Pano Platanias is the “War Shelter” which served as a munitions depot during the German occupation. The battle of Crete began on the 20th of May 1941, when Nazi Germany launched an airborne invasion under the code-name Operation Mercury… Once the the entire island of Crete came under control of the occupying forces, part of the German forces moved into the village of Platanias. The village’s hill was chosen in the first place as the strategic location for controlling both land and sea. Despite other military constructions, like trenches and machine gun site, the German also decided to build the war shelter. The exact spot, below the village’s main church, was chosen because the temple itself provided a natural protection to air bombings and as the rare soft rock was easy to dig. Within 6 months period, local forced workers managed to dig a 120m long underground tunnel.

60 years later, the church committee and citizens of the village decided to reconstruct the War Shelter and utilize it as a small World War II museum in memory of the Battle of Crete. (Text and photo credits FB page KatafygioPlatania)

Be advised by the attached google map for the exact location of the War Shelter.
Opening times during summer daily from 17.00 to 20.00 hrs. Entrance fee 2 €.

Find and book a hotel in Crete

Gavalochori – a traditional village invites you to linger

Places to visit in Crete

Preveli palm beach at the estuary of the river Megas Potamos